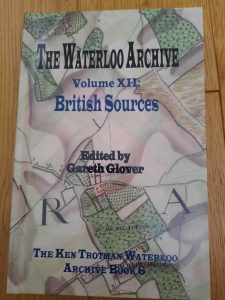 The quest for further material on the Waterloo campaign and the ensuing Army of Occupation continues and I again present a mixed bag in Volume 12. In this volume are a number of interesting accounts of the battle from both contemporary letters and later memoirs, including those of Private James Smithies 1st Dragoons, Lieutenant John Luard of the 16th Dragoons and Captain Thomas Taylor of the 10th Hussars. As for the infantry, I have included the Memoir by Private Mathew Clay of the Scots Guards and a number of less well known accounts from the Light Brigade, including the words of Sir John Colborne recorded by his family and the memories of Lieutenant Charles Shaw 52nd Foot, the memoir of Private John Lowe of the 2/95th and of Quartermaster William Gavin 71st Foot.

Alongside these personal letters and journals, I continue to publish order books of the period. In this volume I have included the orders sent by Lieutenant Colonel Charles Broke for the daily movement of the cavalry on Paris, General Adam’s Brigade Orders for the Light Division both before and after Waterloo, but also a huge selection of General, Second Division and Artillery Orders as recorded in an extensive volume of correspondence from an unknown artillery unit, here we can explore many interesting yey less known aspects of the campaign, particularly regarding the allocation of commissary, medical and chaplaincy staff to the various brigades and divisions of the army.

More continues to be uncovered and there will certainly be a few more volumes yet and I implore readers who have knowledge of other material to please bring it to my attention.