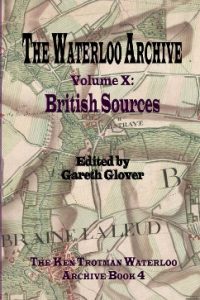 Those who have followed this series of ten volumes (to date) of correspondence from the Waterloo Campaign of 1815 and the subsequent Occupation of France to the end of 1818, will notice a marked difference in the contents of this particular volume. This is not perhaps surprising, as the number of newly discovered letters containing eyewitness accounts of the battle dwindles a little, although new ones do continue to pop up at a surprisingly regular rate. In this volume, the fascinating letters of Captain James Elphinstone 7th Hussars, who was wounded at Genappe on 17 June and captured, tell the story of his interview with Napoleon and his subsequent escape. Lt Colonel George Murray’s short journal and letters home provide a number of interesting facts regarding the 18th Hussars during the campaign and the accompanying map of their locality drawn by Lieutenant George Woodberry of his regiment is also of interest.

Alongside these individual accounts, there is also a wealth of other source material available, which contains just as much if not more invaluable information for those interested in the organisation of the Army of this time. These are the letter books of various commanding officers, containing a mass of letters sent by a myriad of correspondents on an astounding variety of subjects. Such minutiae can at first glance appear overwhelming and often repetitive, but within, many real gems can be discovered. Much of this correspondence was to them very mundane, every-day and probably very tedious; it certainly would rarely if ever merit a word in a letter home or an entry in a daily journal, but to serious historians of the military in 1815, they can be a true gold mine, mentioning incidents and listing equipment we could not hope to know about today without them. Within this volume I have included two such examples. The first is a small copy book owned by Lieutenant Colonel Guy Campbell, who was Assistant Adjutant General to Picton’s Fifth Division. In it, he lists a copy of every Divisional Order promulgated between the 4 June and 1 December 1815, including the daily guards deployed, the responsibilities of officers, complaints and investigations on depredations made by the troops and the outcomes of court martials.

The second is the very extensive, entire two volumes of orders and correspondence received by Major William Tylden’s pontoon train between May 1815 and December 1816, covering their movements during the campaign, including their vital contribution in getting the allied armies onto the left bank of the Seine and maintaining the vital communications between the Prussian and Allied armies. This correspondence covers every conceivable subject, but some highlights are – a complete set of the equipment lists for a pontoon train and the establishment of men; their daily movements; clothing orders; court martials and Boards of Enquiry; methods for dealing with stolen or cast horses; and the payment of Property Tax by officers – is just a random selection.

For these reasons I believe that this is another aspect of the military correspondence of this period that is very much worth delving into and I will do so again in future planned volumes.

I also include a less known account of a visit to the battlefield shortly afterwards, with a number of very interesting sketches made on the field.

I hope very much that you will enjoy delving into some of these more diverse aspects of the campaign as much as I have.