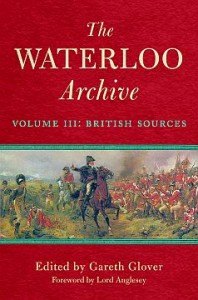 I have explained in previous volumes that a great deal has been written on the subject of the Battle of Waterloo and the campaign that surrounds it and that there are even a smattering of works that deal with the subsequent three year occupation of France by the Allied powers. However, during my studies of this fascinating campaign, I have become painfully aware that much modern material has become a stereotypical regurgitation of previous publications with little if any new research. This to my mind is a terrible crime; as the archives of Europe, and of Britain particularly, are teeming with fascinating material which is gathering dust, the ink fading with time and the paper crumbling, virtually ignored by such self acclaimed historians and experts of this campaign.

The reader might think that perhaps the story has already been told and there is simply nothing new to tell. Each letter and journal I discover proves this to be a fallacy; they all have something new to say; they challenge preconceptions; they disprove theories; they destroy myths; in fact, they prove beyond doubt that our accepted history of the battle and campaign is wrong in so very many aspects and a complete rewrite of many episodes in the campaign will eventually be required.

However, this cannot happen until all of this buried material is exposed to public scrutiny, allowing various aspects of the campaign to be fully re-interpreted. My aim, alongside other worthy members of the Waterloo community, such as Andrew Uffindell and John Franklin is to challenge that situation and to provide the evidence for all, complete; without sensationalism; without attempting to brainwash or peddling implausible conspiracy theories. It is better surely to provide the unadulterated evidence, letting every person make their own judgement on the probable course of events and the reasons they occurred based on good solid primary evidence.

In comparison, the British archives are unique, for they are brimming with personal letters to family and friends or journals that record their innermost thoughts, written only for themselves and close family. These teem with life; the agonies of those who lost someone; the pain and suffering subjected on the thousands of wounded is described in sometimes ghastly detail; the horrors of war are laid bare, but also the relief and happiness of survival. The human aspect of war and military campaigning comes to the fore, the humour and exhilaration; the fears and miseries; the starvation and exhaustion; the horror and the joy. All emotions are described and subsequently absorbed by the reader as they become embroiled in their personal challenges; a bond is formed, their happiness is shared along with their pain. As an example, I challenge anyone to read the last letter of Major Arthur Heyland written to his beloved wife and young family without feeling their pain for his sad death that fateful day.

It will be found that a number of the correspondents within this volume are again simple men in the ranks. It is usually accepted that very few common soldiers of this period could read or write and that the few letters and journals that do exist emanate from more senior non commissioned officers, who were required to be able to write to perform their duties. Volume one proved this to be a fallacy, containing no less than six accounts from ordinary privates and this volume continues with a further three. Their style of writing can be idiosyncratic, their language blunt, but their honest, forthright ways are refreshing and show how the ordinary man in the ranks saw things, giving a different aspect to our studies.

The letter by Lt Colonel Sir George Scovell is of great interest, throwing much needed light on the incident involving units of Kielmansegge‘s Brigade marching off the field of battle and the subsequent arrest of their commander.

The series of letters by Lord Uxbridge and his family describing his part in the battle and subsequent loss of his leg; the agonies of the operation and slow recuperation, are fascinating and were not available to Lord Anglesey when writing his famous work on his ancestor.

The poignant final letters of older family men such as Lt Colonel Samuel Ferrior and Major Arthur Heyland jar noticeably with the bawdy and carefree scribbles of youth by such as Ensign Kinchant (including describing his visits to bordellos) who also lost his life that day. Kinchant’s letters are followed by a very interesting report on Sergeant Ewart, famous for capturing an eagle at Waterloo; who seems to have spent the rest of his life blaming himself for the death of poor Kinchant.

A long series of letters by Lieutenant Frederick Johnston of the 6th Inniskillings and of Lieutenant George Blathwayt of the 23rd Light dragoons also shed important light on cavalry regiments who have few previously published memoirs describing their operations in detail.

It may appear that there is little from the artillery arm in this volume, with only a single letter from a combatant; however the copious correspondence of Captain Courtenay Ilbert, who commanded an eighteen pounder battery which did not serve at Waterloo, but acted as a support arm by ferrying reserve ammunition to the battlefield makes up for this and is a fascinating account of a reserve unit during the campaign.

The Guards are represented by a large packet of letters from Sergeant William Tennant of the 3rd Battalion 1st Foot Guards who stood on the ridge; and an interesting letter from Captain George Evelyn of the 3rd Foot Guards provides a further insight into the defence of Hougoumont farm.

A very interesting letter by Second Lieutenant Richard Cocks Eyre of the 2nd Battalion 95th Rifles makes a mockery of the myth that British troops did not openly plunder the local farmhouses before the battle for food and fuel to burn.

Finally the letters of two brother surgeons, Assistant Surgeon Donald Finlayson of the 33rd Foot, and his brother, Hospital Assistant George Finlayson stationed in the hospitals at Brussels show the fascinating but gruesome aftermath of war and the intense workload of the medical staff for weeks after the battle.

A civilian visitor to the field of war only six weeks after the battle completes this selection which I trust will engage and fascinate the reader.

They bring the story of the Battle of Waterloo and the surrounding military campaign to life, you march with them; you fight with them, you die with them