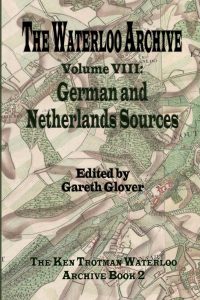 When I originally published the previous volumes of German material in the Waterloo Archive series (Volumes II and V), it was intended that the entire record from the German archives, originally published by Doctor Julius von Pflugk-Harttung in German in 1915 would be translated and published in English in those two volumes. Unfortunately, restrictions during the publishing process prevented all of the material from being published. I have therefore included in this volume, the last remaining parts of the German material from Pflugk-Harttung’s great work, translated as was all of the rest, by my great friend Martin Mittelacher, who resides in Florida.

To this I have added both further German and Dutch material which I have accumulated from a number of sources and I must thank a number of generous persons for allowing me to re-publish part of their work. My friend Erwin Muilwijk, author of the excellent four volume 1815 Series on the Netherlands troops in the Waterloo campaign, has kindly opened his vast store of archival material to me, which he has translated into English. Marc Schaftenaar, who has published a number of Dutch accounts in English on the superb Napoleon Series website has also agreed to allow me to utilise the material he has on the Waterloo campaign, it is therefore anticipated that there will be at least one other volume of Dutch material in this series which will be published next year.

My other good friend Ralf Bazol continues to translate German material for me into English and further material will also be published from him in future volumes.

This and the continuing discovery of further British material by myself means that this series is far from complete and it is hoped that we may reach volume XII at least, given time.

So what delights are in this present volume?

However, perhaps the most interesting, are the memoirs of the Dutch and Belgians of van Merlen’s cavalry at Quatre Bras and of Bijlandt’s and Chasse’s troops at Waterloo, giving much detail on the operations against d’Erlon’s attack and latterly against the final attack of the Guard.

There will be much more in the future.