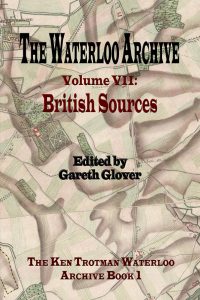 Please note that this is a continuation of the previous Waterloo Archive volumes 1-6 but now with Ken Trotman Publishing hence a new look – it is all new material!

Many readers will know that I published a series of six volumes entitled The Waterloo Archive, between 2010 and 2014. When I commenced the series I had no idea that I would discover so much material on the Battle of Waterloo and indeed the final volume was crammed with material as the publishers, Frontline Books had deemed that they could not support any further volumes, following the standard publishing mantra of ‘the law of diminishing returns’ by which each volume sells less.

At the time, I was not overly concerned, as I had published all I had and I had no idea that there was any further mass of material to be discovered, but how wrong I was. Over the succeeding five years I have accumulated another huge mass of material on Waterloo, but with all attempts to persuade the original publishers to carry on the series failing, I turned to Richard Brown and his Ken Trotman Publishing, whom I am very pleased to say, has agreed to proceed and this is the first new volume of this revived series. At present I have already amassed the material for volumes 7-9, being two further volumes of British sources and another of German sources. Whether there is enough material still to be discovered to take the series even further remains unknown, but it certainly wouldn’t surprise me, indeed I encourage readers to let me know of any other sources that they may know of that could be included in the future.

So, what are the delights of volume VII? We have a number of further letters from rankers, again proving the falsity that the other ranks could not or did not write of their experiences after the battle, including Private William Chapman of the 2nd Life Guards, Private John Herron of the Inniskilling Dragoons, Private John Gray of the 33rd Foot and Private Joseph Wilcox of the 81st Foot who garrisoned Brussels. Other highlights, include a fascinating series of letters written by Ensign the honourable Seymour Bathurst of the 1st Foot Guards to his father, indicating perhaps why his father then stood up in parliament to praise the role of the Guards in defeating Napoleon’s Guard. As always, there are a number of interesting accounts by cavalrymen and the infantry and the diary of First Lieutenant Matthew Louis of the Royal Horse Artillery, but in this volume I have also given prominence to the letters of those in the support services, including the letters of Captain William Staveley of the Royal Staff Corps and the exceptional letters of Captain John Oldfield of the Royal Engineers. I have also included a fascinating series of Cavalry Orders which give much very valuable material.

I have however, kept some very strong material for volume IX, including two previously unpublished journals from officers in the 52nd Foot, with valuable evidence on the final Guard attack. It will also include much valuable material by de Lacy Evans, Colonel Felton Hervey, Sir John Vandeleur and many, many others, so I hope you will continue to follow and support me on this fascinating journey.