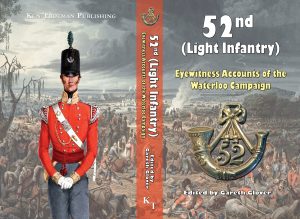 This book is designed as a companion volume to The Great Waterloo Controversy, the Story of the 52nd Foot at the Battle of Waterloo and both books will be published at the same time by two different publishers.

In the process of searching out the evidence for the complete story of the actions of the 52nd Foot at Waterloo, a number of previously unpublished accounts have been unearthed and a number of obscure accounts rediscovered. Much of the material inevitably brought together extends across the entire period of the Waterloo campaign and throughout the following three years the regiment remained in France as part of the Army of Occupation. A great deal of this is of course outside of the remit of the book on their actions at Waterloo, but it was deemed too valuable to simply ignore. It also means that for the first time ever, all of the accounts by members of the 52nd Foot at Waterloo and of those who were eyewitnesses to their actions have been brought together to give the clearest picture of the regiment during these entire four years it is possible to ascertain.

You will find much here on the actions of the regiment at Waterloo and the controversies that followed, but there is also much on their honourable entry into Paris, their social life of the regiment in Paris and during the long boring years in Northern France, including setting up a regimental hunt, with a full complement of hounds from England.

There is also a great deal on the disciplinary record of the regiment, which was surprisingly bad regarding desertions and with high numbers of court martials, the results of which are sometimes very surprising.

The inspection reports by senior officers also hint at a surprisingly poor level of ability of Colonel Colborne at drill and manoeuvres, not perhaps what one would expect given his high reputation.

These are only a few of the interesting adventures that occur, including last minute pardons from execution, other soldiers on murder charges, accidental shootings, stabbings and unfortunate drownings, alongside regular reviews and mock battles re-run for the Emperor of Russia.

Hopefully it will provide the reader with a much more rounded view of the regiment during the period of 1815 to 1818 and will challenge many preconceptions. It is an honest view of the officers and men of the regiment and their abilities, warts and all.