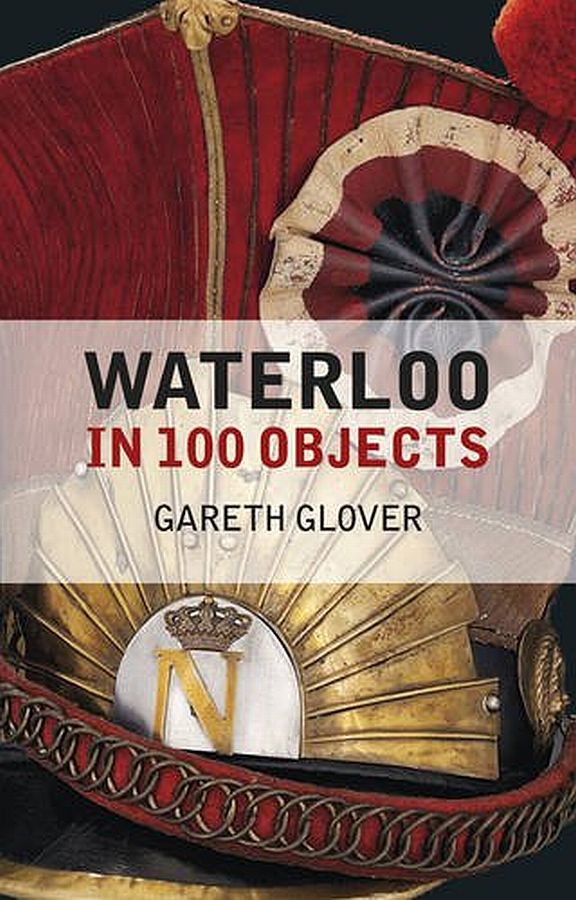 Available from Amazon.co.uk or History Press

In the avalanche of books to commemorate the battle of Waterloo, the  distinguished historian Gareth Glover has somehow managed to come up with an idea which differentiates itself from all the rest. By hitting on the brilliant concept of choosing one hundred images  and objects that bring the period surrounding the battle, as well as the battle itself, so vividly to life, he has made a real contribution to the events surrounding the bicentenary, and is to be congratulated on doing it in a way that is informative, entertaining  and scholarly.
It is important even two centuries later that Waterloo is remembered as a crucial punctuation mark in British history, because it marked not only the final full-stop for Napoleon’s ambitions to hegemonize Western Europe for his French Empire, but also the start of Britain’s own 19th century greatness, especially once the Congress of Vienna, which also took place in 1815, rewarded her for her long campaigns against Napoleonic France with vital nodal points around the world. Although it is debatable whether Napoleon could have defeated the enormous Russian and Austrian forces marching on France in 1815 even if he had won at Waterloo, it is certain that at the battle the Duke of Wellington punctured forever any hopes he
might have had to resuscitate French greatness.
With far too many schools all too often teaching ever more specialized areas of history today, with seemingly arbitrary periods being highlighted for study, Mr Glover is doing a public service in drawing a new generation’s attention to the battle of Waterloo in such an arresting and inspiring way.
To choose 100 objects from so wide a spectrum to illustrate what happened at Waterloo is a peculiarly effective way of making the battle come alive, even two hundred years later. Gorgeous uniforms – see Colonel Marbot’s of the French 7th Hussars, for instance  – cannon, bayonets, the famous Brown Bess
musket and Baker rifle, maps, mausoleums,  relics, medals, curiosities, orders written in Wellington’s handwriting, photographs of key buildings, even the dentures made from teeth pulled out of corpses’ mouths – these are just some of the truly fascinating  objects that Mr Glover has identified and documented for us. They all have the power of making this vital moment in history stand out for us, especially when explained by his succinct yet informative short essays on each.
The result  is that we are drawn into the momentous events of those four days in mid-June 1815, as the objects tell their stories and are fitted into the overall whole. When we see Alexander Gordon’s finely-crafted magnifying glass, for example, we are drawn into the story of Wellington’s brave aide de camp who died of his wounds the day after the battle, and hear of the tears the otherwise highly emotionally-reserved British commander-in-chief shed for Gordon and his other friends who had perished. A medallion of HMS Bellerophon struck in 1820, to quote another example, allows Glover to tell
us of the surrender of Napoleon to Captain Maitland a month after Waterloo.
The nearly one hundred thousand people of all sides who were killed or wounded during Napoleon’s 100 day adventure to try to recapture his throne in 1815 deserve a fine memorial, and they are certainly being given one in these extensive bicentenary commemorations organized by the Waterloo200 Committee, and this fine book is an excellent addition to its work. It is important to our sense of national identity that the more fragile of these fascinating, valuable objects be protected for posterity, so that they can be admired and reflected upon one hundred years hence, on the tercentenary of the battle in 2115. This virtual collection, however, is the modern
equivalent of Troop Sergeant Major Edward Cotton’s museum in 1909, and Gareth Glover should be congratulated on the excellent work he has done in bringing it together for us.