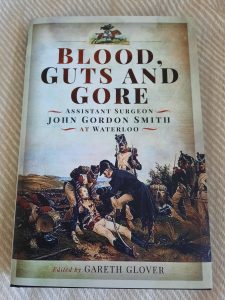 John Gordon Smith (1792–1833), professor of medical jurisprudence, was born in 1792 and educated at Edinburgh, graduating from the university in 1810 with the highest honours in medicine. He entered the army as a Hospital Mate on 25 April 1811, becoming the Assistant Surgeon of the 11th Light Dragoons on 11 March 1813 and then transferring as Assistant Surgeon to the 12th Light Dragoons on 28 October 1813, with which regiment he served at the Battle of Waterloo, when he received the thanks of Colonel Ponsonby for his services to the wounded. He retired from the army on half-pay on 25 December 1818 and settled in London.

Here he found it difficult to establish himself in practice, as he held a Scottish degree only and was therefore not entitled to practise in England. He accepted the appointment of physician to the Duke of Sutherland and resided with him for four years, occupying his leisure in composing a work on forensic medicine. At the same time, he acted as surgeon to the Royal Westminster Ophthalmic Hospital. He also lectured on medical jurisprudence at the Royal Institution of Great Britain in 1825 and again in 1826 and also at the Mechanics’ Institute. In 1829 he was elected the first professor of medical jurisprudence at the London University (now University College) in Gower Street. None of the licensing bodies in London required any evidence of instruction in forensic medicine and there was consequently no class. Smith lectured for two years and then resigned his office. Smith fought hard, but again unsuccessfully, to place Scottish and English degrees and licences in medicine upon an equal footing.

For a time he edited the ‘London Medical Repository.’ He unfortunately died in a debtor’s prison, after fifteen months’ confinement, on 16 September 1833.

He published, besides various contributions to the ‘Edinburgh Medical and Surgical Journal’, ‘De Asthmati,’ Edinburgh, 1810; ‘The Principles of Forensic Medicine,’ London 1821; ‘An Analysis of Medical Evidence,’ London 1825, ‘The Claims of Forensic Medicine,’ 1829 and ‘Hints for the Examination of Medical Witnesses,’ 1829. He then wrote his two volume The English Army at Waterloo and in France, published in London in 1830, the text of which forms the basis of the present publication.

WorldCat, registers the existence of just twenty-two copies of this two-volume work worldwide, all of which are held in prestigious libraries, many connected to renowned universities. Copies in private hands are exceptionally rare and are virtually never seen for sale, therefore it is high time that a revised single volume edition is published, allowing the general public to enjoy this work.

John Gordon Smith did not write of battles, for he saw little of the fighting, but his work is full of the pathos of the suffering of the wounded and dying in the aftermath of the carnage. Beyond the fascinating description of the medical care he and his colleagues were able to provide for those in need, he also offers an excellent ‘behind the curtains’ expose on life as an officer in King George’s army in the campaign of 1815 and the three subsequent years they remained in France as the ‘Army of Occupation’. In the original work, Smith hides the identities of all of those he talks about, only offering initials, which on investigation have been proven to be false, making identification extremely difficult. In almost all cases however, following intensive investigation, the identities of most have been fully discovered. Unfortunately, as many of the records of the 12th Light Dragoons are not extant, little can be done to identify the other ranks whose names he had obscured, nor one major incident regarding an elopement and marriage which has proven particularly stubborn and it has been impossible to identify the main characters involved.

Beyond these minor issues, this book provides an invaluable description of life as a junior medic in a cavalry regiment in the 1815 campaign, covering many aspects of army life rarely if ever covered in most military memoirs. It is both a pleasure and a privilege to be able to bring John Smith’s work to a wider audience.