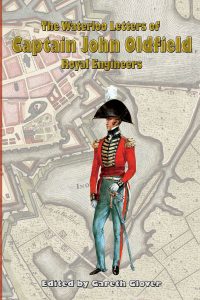 Some sections of the letters of Captain Oldfield Royal Engineers, have been published previously, but at no time have the entire bound book of letters, written up from the originals by Major General [Richard] Oldfield Royal Artillery[1] at Norman House, Westbourne, near Emsworth, Huntingdonshire been published until now. This handwritten book is held by the National Army Museum reference 7403-147.

In the front of the book, General Oldfield has written a short introduction, which I include here:

The following letters give some account of circumstances, which occurred during the eventful period between the first of January 1815 and our occupation of Paris on the 7th of July in the same year, the notice of the duties in which I was engaged, afforded me but little leisure for making very copious memoranda or taking the advantages afforded me by my situation about headquarters. The appendix contains copies of letters from the Duke of Wellington and others, also General Corps Orders. It might be fuller, but that at present I have not access to other documents that are with my library at Oldfield House. The Citadel, Plymouth, 24 December 1844

Captain Oldfield was a member of the team of Engineers tasked with reporting on the fortifications of the border fortresses of the new Kingdom of the Netherlands, which combined both Holland and Belgium in a single kingdom. Having reported on the work required, they immediately set to work, using local manpower to repair the fortifications. Based at Ypres, Oldfield led a team of engineers to repair the defences of the border fortress and to ensure the sluices were ready to be opened, to submerge the surrounding lands in the event of an attack from France. Although they were at peace, no one knew when the defences would be needed again.

In March 1815, the unbelievable news that Napoleon had landed in France soon turned to incredulity as he regained the throne of France with such ease. News that the French King Louis XVIII had crossed the border into Belgium caused Captain Oldfield to immediately send his wife and family to England, for safety and to hurry the completion of the defences of Ypres. Orders were then sent to Oldfield, to proceed to Brussels to take up the role of Brigade Major to Lieutenant Colonel Sir James Carmichael Smyth. In this role Oldfield was fully involved in the organisation of the Engineer department during the Waterloo campaign and he provides a great deal of valuable information on the work carried out by the Engineers in the preparation for the campaign, either in the event of the army advancing into France or being forced to retreat further into Belgium.

Captain Oldfield was then fully involved in ordering the engineering works which the Duke of Wellington desired to be prepared on the battlefield of Waterloo and although he attempts to hide the company commander’s identity, he provides full details of the great failure of a company of the Royal Engineers to turn the town of Braine l’Alleud into a fortified post. Wellington’s victory meant that this failure to protect a major line of retreat through the Soignes Forest was forgotten in the ensuing elation. Had Wellington’s army been defeated, this failure could conceivably have led to a major disaster. The responsible company commander can now be identified however, and it is not the poor lieutenant who is often named as the culprit by history.

Captain Oldfield was also involved in the collation of the various surveys undertaken, to produce a temporary map of the campaign area for the Duke of Wellington. This is supposedly the map which is now the star attraction at the Royal Engineer’s Museum at Chatham, but its authenticity is very questionable.

Oldfield was then instrumental in forwarding the engineers stores and the pontoon bridges with the army on its march to Paris and was an interesting eyewitness to the devastation caused on the line of march.

Oldfield also includes a large number of appendices, some of which simply copy letters from Wellington’s Despatches, but amongst them are also a few interesting texts, including one listing the entire complement of horses of the engineer department.