Eyewitness to the Peninsular War and the Battle of Waterloo 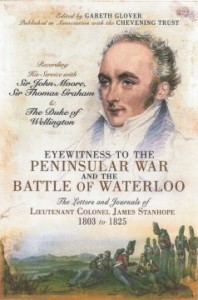 The Stanhopes of Chevening have played a very prominent role in the political and military history of Great Britain since the Seventeenth Century. Many of the family over the generations have gained renown for their achievements, James Stanhope, the first earl, had a distinguished military career and was one of the foremost generals of his time, capturing Minorca in 1708 and followed this with an influential political career; Charles Stanhope, the 3rd earl made a significant contribution to the science of his age and was a political reformist; his daughter Hester Stanhope is probably the most famous and outlandish of the family, living for many years in Syria; Philip Stanhope the 5th earl was renowned as a politician and historian and finally James Richard the 7th and last earl, was prominent at the Admiralty during the early years of the Second World War.  It is therefore not surprising that other members of the family have been sidelined by history and few glimpses of them remain. But this is an injustice and I hope that this work will bring one such family member, James Hamilton Stanhope, a step brother of Hester Stanhope, into the limelight which he so thoroughly deserves. Lieutenant Colonel James Stanhope may not be known so much for personal exploits, but more for the journals he so faithfully kept; the circles he moved in giving him a unique opportunity to record the conversations of the most famous and influential people of his time with whom he worked so closely during many of the great events of the time; thus aiding our understanding of their reactions to the events unfolding before them and the thought processes leading to their subsequent decisions.

James Stanhope’s life was one of privilege, coming from an illustrious family with connections right at the heart of government; he was very close to his uncle and patron, the Prime Minister William Pitt the Younger, who nurtured his education and undoubtedly helped him in his early military career; he responded with unbounded love for his surrogate father and clearly felt the loss of William Pitt; he was at his bedside when he died and left a moving memorial of his final days.

As a third son, with no fortune to inherit, James was sent out to earn a living; he initially chose the Royal Navy, but soon switched to the Army and joined the 1st Foot Guards. Here he learnt his profession with the regiment on home service and when acting as a garrison in Sicily , but after five years of preparation, war finally called upon him.

James had already met Sir John Moore whilst in Sicily  , but via the influence of his sister, Hester, whom John Moore worshiped, he was offered the post of aide de camp and set sail to join the general in Spain  . James landed at Oporto  and journeyed over the wild mountains of northern Portugal  and Spain  , only to reach the army and join Sir John Moore?s Staff on the eve of the Battle of Corunna. It was not to be a happy experience for James, losing both his brother, Charles, and Sir John Moore who so famously died as victory was secured; James was a moving witness to Moores death and felt the loss of his brother deeply; he participated in the burial of both.

Returning home, James returned to the grand social life of London , occasionally taking tours of Wales , Europe being closed to them and generally enjoying life as if there was no war.

Meanwhile, Sir Arthur Wellesley, later to be known so famously as the Duke of Wellington, commanded a British army in Portugal and sought to support the Spanish nation which had risen in open revolt against Napoleon’s attempts to subjugate the country and place his brother Joseph on the Spanish throne. This war, known as the Peninsular War, raged from 1808 until 1814, when the French were finally forced out of Spain ; it was probably the time that the British Army came of age and began to be taken seriously by the continental powers and the traditions of this period still resound through every regiment of the Army to this day.

In 1810 James battalion sailed to help the Spanish forces hold the strategically important port of Cadiz , hearing this whilst just setting out on a tour of the Mediterranean with his step-sister Hester, James immediately sailed for Spain where on arrival Sir Thomas Graham took him onto his Staff. His time on the Isla was spent in learning the language and recording the Spanish political machinations of the Cortes which was then sitting there. But soon enough, active operations called again and James is a very important witness to the campaign leading up to, and the Battle of Barossa in 1811. Being so close to Graham he is an invaluable eyewitness and as such has clearly been used by John Fortescue to help write his history of this campaign.

Transferring with his general to the main British Army in Spain  led by Lord Wellington, James observed the storming of Ciudad Rodrigo and clearly describes the horror on Wellington  s face at the carnage of Badajoz  and how close he came to failure. James saw the taking of the forts at Salamanca  and the manoeuvring before the great battle nearby, but unfortunately did not witness the battle itself, feeling honour bound to escort his general home to convalesce.

Returning to the Army as rapidly as humanly possible, Wellington rewarded James by placing him in the Quarter Master Generals Department, and as such witnessed the abortive siege of Burgos and the horrors of the subsequent retreat into Portugal; but luckily avoided the fate of his new general, Sir Edward Paget, who was captured by marauding French dragoons.

When Sir Thomas returned to Spain , James rejoined him and served with him during the outflanking march that culminated in the Battle of Vitoria, when French influence in Spain was finally crushed. At the subsequent siege of San Sebastian , James received a severe wound, one that was to plague him for the rest of his life and returned home to recover, ending his Spanish war.

Recalled to the colours in 1814; James sailed with Sir Thomas Graham once more, this time to the Netherlands . James journal of this campaign is invaluable and his description of the unsuccessful storming of Bergen op Zoom forms the core of Fortescue’s history of this inglorious event. His skills as a negotiator were clearly shown as he regained all of the captured soldiers from the fortress for his country’s immediate use.

Returning home during the short peace; James was recalled to the army, now at Brussels , to face Napoleon himself at Waterloo . James fought this campaign as a regimental officer and describes the hard fighting in Bossu Wood at Quatre Bras and the hours of suffering in squares on the crest of the ridge at Waterloo , standing rigidly whilst assailed by the hordes of Napoleons elite cavalry, until they were worn down and finally retired as a spent force. James was only a witness to the final defeat of Napoleons Guard and as such the end of Napoleons ambitions.

His negotiation skills again came to the fore as he was appointed to the Staff and secured the fortress of Peronne for the King of France.

Peace then finally gaining a foothold in Europe, James maintained his army role during the three years of occupation that followed, but also tried unsuccessfully to form a political career.

His military career effectively at an end, James married and put all his efforts into his new family; but fate was to cruelly snatch his loved ones away all too soon and he eventually succumbed in tragic circumstances at the age of only thirty six.

The twists and turns of the tragically short life of Lieutenant Colonel James Hamilton Stanhope can now be read in full for the first time. Working on this book has been a truly bittersweet experience; but one I ultimately consider to have been a real privilege and I only hope that my efforts have done him justice.

I do hope that he can at last claim his rightful place in the Pantheon of celebrated Stanhope’s that have so long adorned this country’s history.