From Corunna to Waterloo

The Letters and Journals of Two Napoleonic Hussars 1801-16 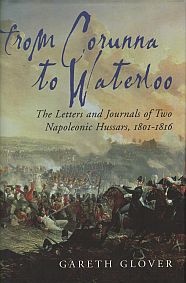 I had been aware for many years that a short selection of  letters written by Major Edwin Griffith 15th Hussars whilst in Spain and France had been published in The National Library of Wales Journal by Mr Norman Tucker of Colwyn Bay, a local historian of some renown. A couple of years ago, I decided to check with the Flintshire Record Office, based at The Old Rectory in Hawarden, who hold the original letters, whether this was the full extent of the documents they had relating to this officer. I was surprised and intrigued when I received the answer that the published  letters formed a mere fraction of the archive, as there existed a  voluminous correspondence sent to his family and a number of journals besides, not only from Edwin Griffith, but also from his nephew Frederick Philips also of the 15th Hussars.
The learned reader well may be aware that there are already some published accounts from the 15th Hussars during the Napoleonic wars; namely Captain Alexander Gordon’s journal and Adjutant Charles Jones diary relating to the Corunna campaign; Joseph Thackwells journal of Spain and Waterloo and Assistant Surgeon William Gibneys journal which mostly relates to Waterloo; and therefore will wonder if there is need for another memoir of this regiment to be published. The answer is undoubtedly a resounding yes, Edwin Griffiths and Frederick Philips proceeded to Spain with the Army under Sir John Moore in 1808; both writing a number of letters and Edwin further wrote a full journal of the Corunna campaign; and as the regiment was effectively operated in wings, Edwin often serving in a wing separated from Gordon; their experiences are markedly different and thus this journal helps to complete the story of the regiment’s part in the Corunna campaign.

The letters from the regiment whilst in England prior to the Corunna campaign when they were often spread across vast tracts of England in small detachments to quell electoral riots or to act as customs officers are often intriguing. Occasionally these duties were suspended so that they could act as a bodyguard to the royal family; or to escort huge shipments of treasure. Those from the midlands between 1809-12 where they policed the civil disruption and economic unrest caused by industrialisation, high taxation and the shortage of grain; are again very interesting in regard to the cavalry’s domestic role as Britains police force.
The journals and letters of the 1813-14 campaign when the regiment rejoined Wellington’s army in Spain, are virtually unique with regard to the regiment, as they provide a very valuable addition to our knowledge of the actions of this regiment in Spain and Southern France including their valiant part in the battles of Vitoria; and Orthes where Edwin actually commanded the regiment. The only previously published diaries of the regiment during this period, being Thackwell’s and the anonymous Jottings from my sabretasch , which are very limited in their extent. Their journals
and letters in Belgium during the Waterloo campaign further advance our knowledge of the regiment in this famous campaign.

These young officers seem to have had strong family ties, spending as much time together on campaign as duty allowed and both wrote regularly to maintain links with those left at home. Their letters were clearly only intended for the eyes of their family and friends and are therefore of great value, as they indicate their true feelings at that very moment regarding events and the conditions they endured, indeed they often also contain strong criticism of those around them, particularly those in command, the conduct of operations and the Spanish!

See a review of this book