Memoir of the Waterloo Campaign, 1815, by Lieutenant Colonel William Fielding, 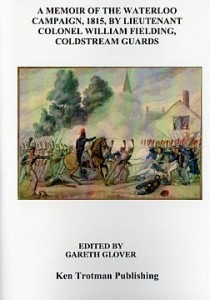 Whilst searching the archives of Britain for more material to publish from the Napoleonic Wars, I sometimes discover little oddments that could never constitute a full book of their own, but fit perfectly into the series of small booklets I produce in cooperation with Richard Brown at Ken Trotman Books. This is one such example, written by Lieutenant Colonel William Henry Albert Fielding, Coldstream Guards (1836-1895) the son of the 7th Earl of Denbigh, and who died of cholera in 1895. This is to be found at Warwick Archives, reference CR2017/W9 and is published with their kind permission.

It is always interesting when a serving army officer records his thoughts on a campaign and particularly if produced during a period when technology has not moved on so far that their own experiences of campaigning become irrelevant.

Fielding was used to horse cavalry; artillery although having greater destructive capacity was still horse drawn and although the infantry now had rifled weapons, very little else had changed. He knew their movement rates, capabilities and limitations; therefore his estimates of the capabilities of troops in the Waterloo campaign can be largely trusted.

Being the first serious British military expert that I am aware of (I do not consider Siborne as such, he was a clerk in reality), to consider the actions of the Prussian forces, it is therefore of even greater interest.