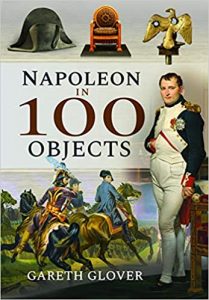 This volume is the first of a pair planned to be published in 2020 marking the 250th anniversary of the birth of two of the greatest men in world history, both born in the remarkable year of 1769, Napoleon Bonaparte and his greatest adversary Arthur Wellesley, the Duke of Wellington. When I say remarkable, I do not mean because of particular world events, scientific discoveries or even life-changing social revolutions. What 1769 should be famous for, is the incredible number of military men born this year, many of whom would certainly appear in a list of the world’s top one hundred military leaders of all time. Beyond Napoleon and Wellington, 1769 saw the birth of Marshals Ney, Soult, and Lannes, Generals Decaen, Anson, Lumley, Arakcheyev, Malcolm, Belliard, Brock, Muhamad Ali, von Decken, Hope, Joubert, Markov, Thiebault, Wallmoden and Wittgenstein, not to mention Admiral Hardy (of ‘Kiss me Hardy’ fame), Sir Hudson Lowe (Napoleon’s gaoler) and Sergeant Ewart (who captured an eagle at Waterloo), to name but a few. In fact, well over fifty major military figures were born this year, a truly remarkable total.

Of all of these however, it cannot be denied that the man who influenced Europe more than any other was Napoleon Bonaparte, who rose to power, by promising to bring order to the chaos and atrocities of the French Revolution. Every great man is however an enigma, composed of a confusion of good and bad, showing glimpses of being brilliant, tyrannical, self-obsessed, patriarchal, ruthless, progressive, fanatical and intolerant at different times and Napoleon certainly displayed all of these traits and many more during his fifty-one years of life.

More books have probably been written about Napoleon than probably anyone else over the last two centuries and historians are split pretty evenly into two very distinct camps, one which glorifies his achievements and sees the great good he did, whilst the other tends only to see the terrible things he did and the terrible loss of life for which he is blamed. As a historian who likes to take a more balanced approach, the story of Napoleon does not make it easy for me to sit comfortably in either camp, because I find that it is impossible to praise all of his actions or indeed condemn them all.

No-one can agree fully on Napoleon’s legacy, the three quotes below are typical of the range of thought which can be found and all are right in some respects but also wrong in others.

The ‘mightiest breath of life which ever animated human clay’ Chateaubriand

‘He was the greatest genius of his time, perhaps of all time, yet he lacked the crown of greatness – that high wisdom born of reflection and introspection which knows its own powers and limitations, and never abuses them.’ Tarbell

He ‘was a deliberate artisan of his own legend’ Morgenthau

Even whilst he lived, opinions of Napoleon varied considerably and even split nations into factions for or against the great man. I say great man without hesitation, because it is clear that historians from all factions can agree on one thing, that Napoleon was a colossus on the world stage and one of the few great world influencers who would undoubtedly gain a place in the pantheon of human history. The question is whether overall, he did more good than bad in his life or not.

Ever since his death, there has always been a strong body of people who have hero worshiped Napoleon as though he was a deity, this French image of the Emperor clearly hoping for a ‘Second coming’.

Many, if not most Europeans, saw Napoleon during his reign, as a tyrant who had to be removed from power at all costs, whilst many others praised the reforms he brought to much of Europe. Cartoons depicting him as the devil’s child abounded.

British children were taught nursery rhymes which spoke of ‘Napoleon the Child Eater’, whilst British toilet humour even went so far as to produce a potty which allowed the user to signal their disdain.

These constant attacks against Napoleon, particularly in the British press, have heavily tainted Anglo-Saxon attitudes towards Napoleon for two centuries and I have tried to dispel some of these myths throughout the book, but I will deal with a few right here.

‘Little Napoleon’ or the ‘Dwarf Emperor’ was invented by the British cartoons which were regularly published, but this image, belittling him, endures to this day.

In truth, Napoleon measured 167cm or just over five foot 6 inches, which was not tall, but an average height for a Frenchmen of the time.

I also chosen to avoid the salacious and I have therefore not shown an image of ‘Napoleon’s penis’ or at least the shrivelled up remains of what is claimed to be such. I deal with his death and the autopsy in some detail and there is some evidence that a small piece of rib was removed surreptitiously during his examination, but absolutely no evidence that it was detached and given the number of observers in the room I simply cannot believe that such an event occurred. Napoleon’s life has thrown up many charlatans and false claims and this is one which certainly needs to be consigned to the scrapheap.

Other minor idiosyncrasies which can be verified are that Napoleon did take snuff very regularly, but he didn’t really inhale it, simply breathing in the aroma and discarding it. He loved liquorice, was quite abstemious regarding alcohol, a plain eater, couldn’t sing, didn’t like the smell of paint, was superstitious, a terrible dancer, cheated at games of chance and a bad loser. He also insisted on always having well manicured nails, but his writing was atrocious and people he liked would often receive a playful pinch on the cheek. He could also retain a vendetta for years, Wellington’s would-be assassin even being rewarded in his will.

However, on the other tack, Napoleon certainly did not shoot the nose off the sphynx whilst in Egypt, he did not escape from St Helena, being replaced by a double, his last words were not ‘Josephine’ and he was not killed by arsenic poisoning. And he only put his hand in his jacket in paintings, never in real life.

Indeed, modern attitudes to Napoleon are still marked by extremely strongly held views of him and his legacy. Many Americans are strongly positive regarding Napoleon, lauding his strong personality and his great martial and legislative achievements. At the same time many in Germany, Russia and the Anglo-Saxon world still stick solidly to the view that he was a warmonger, hell bent on world domination, with no thought of the human cost.

As to France herself, it must be said that most French people are confused as to what to think of him and this confusion is reflected within the modern educationl system itself. The French celebrate his great reforms of the education system and the law, but struggle as a major member of a modern European federation, to feel comfortable with regard to his military career and the whole concept of his European Empire.

This book is therefore designed to look at one hundred items associated with Napoleon and using these to discuss a great variety of the events that Napoleon influenced and those which influenced him, to try to dispassionately identify the truth behind the events, showing not only Napoleon’s designs, but also the reactions of those affected.

It is not for me to make an overall assessment of Napoleon’s life, as it is futile to try to pigeon-hole such a great man, I leave you the reader, to assess for yourself, having looked at all these various aspects of his life, how Napoleon finally stands in the scales of justice.