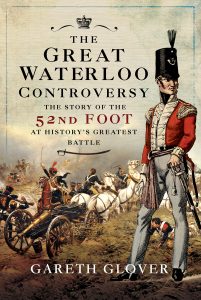 The lightning Waterloo campaign of 1815, in which three great battles were fought in only three days and which culminated in the total defeat of Napoleon’s last great army, has long been a source of endless debate, rancorous argument and conspiracy theories. The conflict is so shrouded in myth, conjecture and claims of betrayal, that it is not easy at times to separate fact from fiction.

For the past decade or more, a small number of dedicated historians – including Pierre de Witt, Erwin Muilwijk, Paul Dawson, Stephen Beckett, Robert Burnham, Michael Crumplin, Andrew Field, John Franklin and my good self – have delved into the archives all over Europe and beyond, to unearth literally tens of thousands of documents, which had been lost or forgotten, in an effort to help build a clear, honest, unbiased narrative of the events of that fateful campaign. Much that is completely new to us has been discovered, a number of myths have been buried, but a few contentious issues remain stubbornly unresolved.

In many cases, these contentious issues have been regularly reignited by partisan ‘re-appraisals’ which have unashamedly set out to prove their own chosen stance on the issue, no matter what the evidence actually shows. Indeed, many are guilty of selective editing of material and unquestioning use of original documents that conveniently support their claims, without subjecting them to the same stringent tests that they use on those that do not support their theory.

When even written with the best intentions, ex-members of a particular regiment or corps cannot help but bring a heavy baggage to the task, often possessing an understandably intense regimental pride and loyalty and a wish to celebrate their greatest achievements. All laudable intentions, but these factors make it very difficult, if not nigh on impossible, to view all of the evidence, good or bad, and to produce a balanced, honest view of their achievements and of their failures. No human comes without some biases, but a cold, objective weighing up of all of the available contradictory evidence in such circumstances, can only, I would submit, be achieved by someone who has no personal interest in the outcome, other than a desire for a balanced, thoroughly honest assessment of all of the relevant facts without any bias.

As a historian, I am also painfully aware that less than one thousandth of the documentation produced during any given period, actually still survives to this day, even in such an era as the early nineteenth century, when the system only functioned at all, by the production and exchange of vast quantities of paper documents. Often the most vital evidence, or the key to a specific question is not to be found, it has been lost over the vagaries of time. It can be incredibly frustrating and much of our time as historians is taken up, piecing snippets of evidence together, in an attempt to work out what the missing material said. What it is not, almost certainly, is evidence of a cover up, or an attempt to mislead by purposely removing incriminating evidence.

Conspiracy theories are therefore extremely easy to manufacture, the simple claim that the evidence has been ‘removed’ rather than more accurately ‘lost’ is enough to cast doubt and engender suspicion, add a few selective comments to hint at nefarious dealings and there you have it. Unfortunately, once the seed has been sown, it is often hard to disprove it, despite much circumstantial evidence against it, because the seed has been planted and of course, the vital solid evidence is ‘mysteriously’ unavailable. This is not good history.

One of the most enduring arguments regarding Napoleon’s defeat at Waterloo and the one which is fought over with perhaps the most vitriol and passion on both sides, is that of the defeat of the Imperial Guard at around 8 pm on the evening of 18 June 1815. It is rightly seen as a decisive moment, when Napoleon launched a final all-out attack with his finest troops, his world-renowned Imperial Guards, only to see them defeated and chased from the field of battle. The sight of the failure of his ‘Immortals’[1] shocked his army to the core and morale, already shaken by the sound of the Prussians arriving and attacking their flank, collapsed disastrously and caused them to turn and flee on mass, ending Napoleon’s dreams of re-establishing his glorious empire for ever.

The argument centres on which regiments delivered the coup de grace and how it was actually administered and here the evidence is often fragmentary, incomplete and shrouded by the taint of regimental bias. Even how the French Imperial Guard attacked is still debated, with many eyewitnesses contradicting each other. When it comes to individual regiments arguing over the relative merits of each to a claim of the laurels of defeating the Imperial Guard, the waters become very murky indeed, with claim and counter-claim being made and with little impartial fact finding in evidence.

It is into this maelstrom that I stride, not by any means oblivious to the heated claims and sensibilities of the contending parties, but determined to re-examine the dozens of witness statements, many recently discovered, including the only full account written at the time by an officer of the 52nd Foot, which has never been published or indeed properly studied before. I will assess the reliability of the witnesses, given their military experience, ability to see what they describe and even the length of time after events that they described them.

Given the impossibility of getting three eyewitnesses to a terrible road traffic accident to agree on the details within twelve hours of the incident, it is a daunting task to try to establish the sequence of events as seen through a haze of smoke, as the light of the day was beginning to wane, when their concentration was fully occupied on their own immediate circumstances and caring about their self-preservation, whilst friends fell besides them at every moment. Because many of these witnesses recorded their memories of these events some twenty or even forty years after the event and often after discussing it at great length with fellow survivors, great care must be taken to identify the vein of truth running through their time worn and inevitably greatly embellished accounts.

This work is unapologetically not simply another account of the entire campaign. This work concentrates solely on the exploits of the Light Brigade in the campaign and therefore only mentions aspects of the campaign in which they were not involved in the briefest terms.

For the reader who wants to explore the entire campaign in detail, this is not the work for you. Detailed descriptions of the Battle of Quatre Bras, the retreat via Genappe and d’Erlon’s attack and the counter charge by the British heavy cavalry, but what you will find within is the most thoroughly researched study as to the quality and discipline of the Light Brigade and particularly the 52nd Foot in the Waterloo campaign and the most thorough examination of the ‘Crisis’ of the battle ever produced.

This work will look specifically at the 52nd (Oxfordshire) Regiment of Foot, who were one of the strongest regiments in the army and rightly became one of the most renowned regiments of the Duke of Wellington’s army in the Peninsular war and during the ensuing Waterloo campaign. Trained as light infantry and personally commanded by the renowned General John Moore, until his death at Corunna, their reputation was second to none. They were commanded at Waterloo by another highly regarded officer, Colonel Sir John Colborne. I will look at their training, how prepared they were for the campaign, how they performed and also briefly look at what they did during the subsequent three years, forming part of the Army of Occupation in France until 1818.

I will fully investigate their role at Waterloo, hailing their achievements, but also not hiding their failures and I will assess fairly their contribution to the great victory. I will also investigate the claims that they were robbed of their laurels and who if anyone was to blame for that.

This volume will be published simultaneously with a sister volume containing all of the known eyewitness statements from the 52nd Foot from 1815 to 1818 during the Waterloo campaign and the subsequent Army of Occupation in full. This volume will be published by Ken Trotman Publishing and will be entitled The Waterloo Campaign and the Army of Occupation 1815-18, Eyewitness Accounts of the 52nd (Oxfordshire) Regiment of Foot.

It is intended to give the first in-depth investigation and analysis of a single regiment in the Waterloo campaign and to establish a very honest assessment of their achievements. You as the reader can judge, having read all of this evidence, and can form your own opinion.

[1] The term Immortals was actually a term of derision, invented by Napoleon’s ‘ordinary’ line infantry. They hated the fact that they were paid more, lived better and were held in reserve in most battles and rarely used, as too valuable to lose.