The Men of Wellington’s Light Division, Unpublished and Rare Memoirs & Letters of the 43rl Light Infantry in the Peninsular War 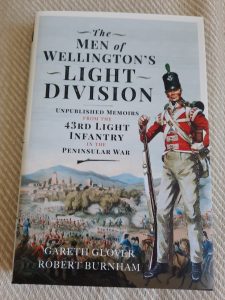 History of the 43rd Foot in the Peninsular and Waterloo

Having spent the last two decades scouring the archives for unpublished letters and journals of soldiers who served in the Napoleonic wars, I have not particularly concentrated on the regiments that formed the Light Division in the Peninsular war because I was aware that due to their fame, many memoirs from members of these regiments had already been published and it was therefore highly likely that there was little left to publish.

However, a steady trickle of further memoirs by members of the Light Division have been published in the last twenty years to add to the already impressive total, showing that the mine is far from fully exhausted. These include those of Captain George Miller[1], Lieutenant James Gairdner[2] and Rifleman George Walton[3] of the 95th Foot, Sergeant Samuel Harrison[4] of the 43rd Foot and Captains George Ulrich Barlow[5], Charles Kinloch[6], John Ewart[7] and Lieutenant Charles Holman[8] of the 52nd Foot.

I also received a request from my good friend Robert Burnham, who resides in Hawaii, to help him search the archives for any unpublished material by members of the Light Division still existing in the British Library, the National Archives at Kew, The National Library of Scotland, the Royal Green Jackets Museum (now held by the Hampshire Record Office in Winchester) or in the Soldiers of Oxfordshire Museum at Woodstock in Oxfordshire, as part of his thorough preparation for his excellent book on the Light Division in 1810[9] and for his further projected volumes. This search unearthed a virtual treasure trove of material which astounded both of us. There was simply more than we could have possibly imagined there, indeed material was discovered that some of the museums didn’t even realise that they had themselves.

From this was spawned the idea of producing a book on each of the three regiments that formed the core of the Light Division, publishing the masses of material unearthed, much for the very first time, or at most has only previously appeared in obscure and very rare publications. This, the first volume, covers perhaps the least known of the three regiments and certainly the one with the least number of memoirs published, that is the 43rd (Monmouthshire) Regiment of Foot. Some eight individual memoirs have emanated from this regiment to date and half of these are rare, whereas the 52nd Foot have fifteen published and the 95th Foot no less than seventeen; it was therefore felt that the voice of the 43rd Foot needed to be enhanced most urgently. The others will however get their turn in subsequent volumes.

The three infantry regiments of the Light Division in the Peninsular War maintained quite different characteristics from each other. Captain John Cooke of the 43rd Foot explained not only the brotherhood of regiments, but also their subtle differences at the end of the war in 1814[10].

Though amongst the regiments which composed it there existed an unanimity which was almost without a parallel in war, yet there was a shade of difference between them, a something peculiar to each corps distinguishing it from the others, which was the more remarkable as amongst them there was a sort of fraternal compact, and it has occurred that three brothers held commissions at the same time in the 43rd, 52nd and Rifle Corps.

The 43rd were a gay set, the dandies of the army; the great encouragers of dramatic performances, dinner parties and balls, of which their headquarters was the pivot.

The 52nd were highly gentlemanly men of a steady aspect; they mixed little with other corps, but attended the theatricals of the 43rd with circumspect good humour and now and then relaxed, but were soon again the 52nd.

The Rifle Corps were skirmishers in every sense of the word; a sort of wild sportsmen and up to every description of fun and good humour. Nothing came amiss: the very trees responded to their merriment and scraps of their sarcastic rhymes passed current through all the camps and bivouacs.

In this way the brothers of the three regiments met together, each being the very type of the corps to which he belonged.

Some of these attitudes are clearly borne out by the memoirs and letters of the men of each regiment.

This volume is far however, from all the material we found on the 43rd Foot. There is in fact so much material from this particular regiment that four very large accounts will also be produced individually in stand-alone books via Ken Trotman publishing in the next year. These will be published in the following order: the letters of Captain William Freer 43rd Foot; the journals of Major John Maxwell Tylden 43rd Foot, the journal of Lieutenant Henry Oglander 43rd & 47th Foot and Major John Duffy 43rd Foot.

With so much new material to be studied, it is inevitable that a great deal of new evidence will be discovered that will change our understanding of many aspects of the life of the troops, the military operations and even their thoughts on their fellow officers and seniors at the very time that incidents occurred.

I hope that you the reader will be as intrigued with what we have unearthed as much as we are.

[2] Published as The American Sharpe: The Adventures of an American Officer of the 95th Rifles in the Peninsula & Waterloo Campaigns. Gareth Glover. Barnsley: Frontline, 2017.