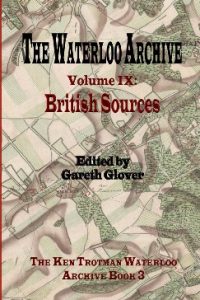 This volume is now available from Ken Trotman Publishing

It never ceases to amaze me that I still continue to discover further Waterloo material and each time I think that I have reached the bottom of the barrel, a great mass of quality material comes to light and enlivens the search once again.

This volume, the third in the Ken Trotman Second Series of the Waterloo Archive is an excellent proof in point. I have uncovered a mass of personal letters from all arms of the service. A number of which give a fresh view on various aspects of the battle and indeed the overall campaign.

From the visit of Lord Grantham to the battlefield only a few days after the battle, to the very interesting account of the campaign by Major Sir George de Lacey Evans, from the exploits of Admiral Sir Sidney Smith to aid the wounded in the days after the battle, to the letter of Lady Susan Clinton describing the scene at Brussels and her fears for her husband and the memories of Life Guardsmen who acted as sitters for the artist Benjamin Haydon.

Besides these fascinating accounts of the peripheries of battle, we also have a significant number of accounts not only from the Guards and the 52nd Foot but also significant accounts from the 33rd Foot and 92nd. Not to forget the Support Services, with an interesting set of letters from William Nicolay of the Staff Corps and Sir Augustus Frazer commanding the Horse Artillery. We also have an interesting set of letters from Lieutenant Francis Home of the 81st Foot which formed the garrison of Brussels during the campaign.

We also have no less than eight further accounts from men from the ranks to again prove that many rankers also wrote home regarding their exploits.

I hope you will agree that this is a very varied range of correspondents, with some very interesting things to say.

The hunt for further material continues!

This volume contains the following letters