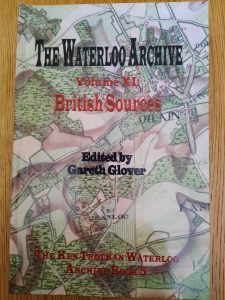 The hunt for original archival material from the Waterloo campaign of 1815 and subsequent Army of Occupation in France to 1818, continues apace. In Volume 11 of this collection, we have an eclectic range of material.

We begin with two extensive Brigade Order books from Major General Sir Hussey Vivian’s 6th Cavalry Brigade. These orders cover all aspects of the operation of a cavalry brigade on campaign and delve into many areas which will be unfamiliar to the modern reader, but would have been mundane and ordinary to a cavalryman in 1815 and are therefore rarely, if ever, mentioned in their correspondence. The orders can therefore be fascinating, opening up a multitude of new facets in our understanding of the life of a Napoleonic cavalryman and the internal organisation of both a cavalry regiment and brigade of the period.

I also include a few more letters and journals from individual officers who served in the Waterloo campaign which I continue to unearth with regularity. In this volume we have a number of accounts from officers of the 52nd Foot and also a previously unidentified letter from an officer of the 32nd Foot. I also enclose some commentaries provided by Ensign Rees Gronow of the 1st Foot Guards, in his less well-known 2nd, 3rd and 4th volumes of memories, published in the few years after his famous and constantly reprinted first volume of Reminiscences. These, together with letters from two women who attended the Duchess of Richmond’s Ball and witnessed events in Brussels during the fighting are also of great interest.

Finally, I enclose two very lengthy transcripts of the court martials of two officers of the 32nd Foot over their actions during the Battle of Waterloo. These court proceedings are of interest on many levels regarding military court procedures of the time, but they also provide fascinating and highly detailed descriptions of the movements of the battalion during the battle, but also the actions of individuals and also the inevitable confusion of war. One of the officers charged is Captain Henry Ross-Lewin, a name well known to students of the Peninsular War, who published his account as The Life of a Soldier, by a Field Officer in 1834, but ended the account of his military life in 1814, saying nothing of the Waterloo campaign at all. He may have intended to continue his account in a second volume, but he never did publish anything on the subject, perhaps the controversy raised by his court martial caused him to refrain from entering on such a painful subject, but we will never know. The detail of the actions of the 32nd are fascinating, but so are other details, such as the finest description of the height of the banks of the sunken lane to the east of the crossroads I have ever discovered.

I do hope, that you the reader, enjoy this journey through the mass of such varied information and find it all as fascinating as I have.