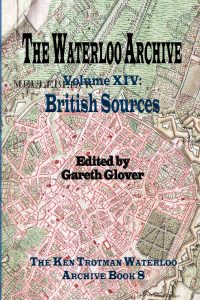 This the fourteenth volume of the Waterloo Archive will be the last
volume for some time but will almost certainly not be the last ever. A
mountain of other work I wish to publish will command my attention for
some time to come.
However, this volume still contains an eclectic mixture of reports, letters
and memoirs, all bringing something of interest to the overall mix. There
are some particular highlights I would like to mention, there are the
memoirs of Lieutenant Benson Hill who served with the siege artillery,
supporting the Prussian sieges, working alongside Colonel Alexander
Dickson – this explains his total disappearance during the Waterloo
campaign. The short illustrated notes by Lieutenant William Elliot are of
interest, being produced soon after the battle, along with a number of
further letters from those actively engaged in the campaign, including
three further rankers, one an anonymous trooper in the 2nd Life Guards,
Sergeant John Gibson of 1st Foot and Private George Weale of the 29th
Foot, who were at Ghent during the battle, but soon joined the advance
on Paris. The letter of Lieutenant Thomas Gordon of the 92nd reporting
the death of a friend to his brother at home is short but poignant.
Beyond these personal communications, I reproduce the contents of
another Letter Book from Sir Hussey Vivian, this one containing the
General Cavalry Orders throughout the campaign and the Army of
Occupation. These cover every conceivable matter and although dry
contain much of great value to the understanding of the internal workings
of the army during this campaign.
I also reproduce a few fascinating accounts from non-combatants. The
letter of Mrs Maria Ramsay (aunt to Norman Ramsay) is telling on the
terrible cost on one family throughout the entire Napoleonic wars. The
letters and journal of John Cam Hobhouse are particularly fascinating, as
he was residing in Paris when Napoleon returned from Elba and although
politically a supporter of the Emperor, his views on the true thoughts of
the French on his return are very incisive. He witnessed the Champ de
Mai and only fled for the border when Napoleon left Paris to join the
army. Refused permission to cross the border, he was forced to return to
Paris and then witnessed first-hand, the French reaction to the defeat and
witnessed the arrival of the Allied armies. He was also an early visitor to
Waterloo. For all of these reasons his account is fascinating and very
revealing. I also include interesting extracts from the journal of Major
William Frye of the 3rd Ceylon Regiment, who happened to be in Brussels
during the campaign while on a European tour. Finally, a published article
from the New York Times on 1890 on the seventy-fifth anniversary of the
Battle of Waterloo, publishes a number of very interesting pieces, taken
from original newspaper reports published during the campaign and also
records the memories of a number of Belgians who had witnessed the
campaign and were still living.
I do hope you find this very varied bunch as much as I did, collating them
all.