Waterloo After The Glory, Hospital Sketches and Reports of the Wounded After the Battle 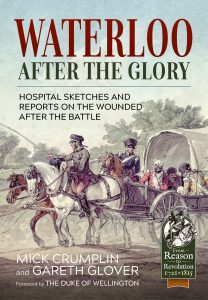 By Michael Crumplin & Gareth Glover – Foreword by The Duke of Wellington

This book has been born out of the discovery of some remarkable medical records in the archives of Edinburgh University Library, relating to the care of the wounded following the momentous but extremely costly Battle of Waterloo, fought on 18 June 1815.
Michael Crumplin, ‘Mick’ to his friends, is an ex-surgeon and has studied military surgery through the ages for much of his life, so when he brought these records to my attention and asked me to co-write this book I did not hesitate to agree. A huge amount has been written on the Waterloo Campaign, which consisted of four major battles fought in lightning succession between the 16 and 18 June 1815. However, whilst much has been written regarding this pivotal European conflict, which finally ended almost twenty-three years of near continuous warfare, little of this voluminous literature adequately details the sacrifice and suffering of the soldiers who fought these wars. Few publications concerning the Battle of Waterloo and the other related actions, give more than a fleeting account of the fate of the tens of thousands of casualties and who cared for them, nor indeed where they were tended. Understandably, many of the surviving participants only sought to forget the horrors of the conflict and the hardships they had endured, in an effort to progress with their lives and aspirations. However, this unfortunately hides from historians their real challenges and the historiography of the period can only be enriched by addressing these very human aspects of conflict. This is not an aspect that is ignored in the histories of the two World Wars, particularly the first of these, perhaps we can be psychologically more detached in our views of earlier wars, but that cannot be right.
Those who study the medical and surgical aspects of this period of military history struggle to comprehend the incredible stoicism of many, not only of the victims, but also the dilemmas and failures of medical staff and their simple and often ignorant therapies. Certainly, expectations of pain relief, survival and life expectancy in general were far less than today. This was a time when men in the ‘lower echelons’ of society could only expect a lifespan of 40 or a few more years. Their wives and children were prone to early demise and the labours of both men and women were brutal and harsh. Such tedious work over very long hours came with little reward and enabled them to only just survive at subsistence level. Most of the labouring class would likely be physically strong and expect little from life in the way of pain relief, effective therapy or comfort when they became ill or were injured. Medical men would also frequently have had early hopes of survival for their patients, only to see these dashed by unexpected complications or due to their still primitive methods.
The material found in the University of Edinburgh Library archives goes some way to help us understand the fate of many of the victims of this notorious battle. A large number of fascinatingly detailed case reports written by senior surgeons on the scene, and line drawings of over 170 patients indicating their wounds, accompanied in many cases by personal identification of the individuals, detailed descriptions of their injuries and their surgical outcomes, bring the fate of the casualties into the stark light. The line drawings attached to each set of notes, are simple and certainly far less sophisticated illustrations than Sir Charles Bell’s paintings of the victims of Corunna and Waterloo, or those by Henry Tonks during World War One. These still remain an important visual record of the experience of warfare at this time. This is further enhanced by a host of general casualty returns indicating the numbers and types of operations performed and their outcomes from a number of diverse hospitals in both Brussels and Antwerp. These records represent all or part of a series of official returns submitted to the Army Medical Board following Waterloo, in an attempt to educate and improve future generations of military surgeons.
Michael Crumplin and Dr Martin Howard have both previously produced books on military medicine/surgery in the Republican and Napoleonic wars, detailing the organisations set up by both the British and the French, the characters involved and the methods then in use, with a few case histories. This book is therefore designed to both complement and expand upon these works, to take our knowledge further forward, by describing how the allied surgeons (for with the rapid retreat of the French army, they were the ones largely left to deal with the wounded of all the protagonists), supported by both the Belgian military and civilian surgeons and even by a significant influx of British surgeons, who travelled over in the weeks after the battle to aid the humanitarian effort. The exact numbers of the wounded during this lightning campaign are not known, but conservative estimates say that there were at least fifty thousand French, British, Prussian, Dutch, Belgian, Brunswick, Hanoverian and Nassau troops requiring medical assistance. Such numbers, simply overwhelmed the medical services of the armies involved and the aid of civilians to collect the wounded, transport them to makeshift hospitals and civilian surgeons to operate on them, was vital for the saving of many of these casualty’s lives.

Their story has yet to be fully told, so finally here it is.