A Life Guardsman in Spain, France and at Waterloo

Including Memories of Life Guardsman Shaw 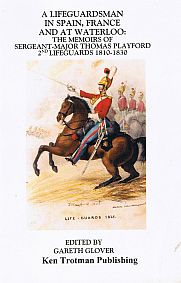 The memoirs of rankers are rare and it is surprising to find that this is the only memoir of the 2nd Lifeguards apart from Waterloo correspondence published by Siborne and myself.
Thomas Playford was born in Yorkshire in 1795 and was entered on the books of the 2nd Lifeguards in 1810 at the tender age of 15, although recorded as 18 years of age, being nearly 6 foot 2 inches in height!
Thomas was perhaps a slightly strange figure for a soldier of this period; being well educated, happy in his own company, having a strong religious conviction and with an aversion to strong drink and the company of loose women! There is some irony in his omitting from his memoirs a moral lapse that in fact led to his joining the Lifeguards, an event that may have hardened his moral resolve.
Despite being out of step with soldiering, he was observant and analytical, causing his views of military campaigns and life in the army to be astute and well informed.
Thomas accompanied the 2nd Lifeguards to Portugal in late 1812 and marched across Spain to participate at the Battle of Vitoria in 1813 and the campaigns in Southern France in 1814.
Returning to England at the end of the war, they were rushed to Belgium to participate in the Waterloo campaign. Thomas is able to give much valuable information regarding the charges of the Household Brigade at Waterloo and his first hand knowledge of the brave exploits of his comrades such as Shaw and Godley, made famous immediately following the battle, are of particular
interest. The 2nd Life Guards lost 156 casualties at Waterloo from an initial effective strength of 231, a 68% casualty rate!
His version of what it was like to be in that famous charge and its
unfortunate aftermath, is like none other. As you read his words, you can picture yourself riding alongside him; the grim determination, the utter confusion, the abject terror and the bravery and skill of both adversaries is conveyed with vivid realism. No false heroism for Thomas, he tells it as he saw it, and is not afraid to recount how despite riding back and fore across the field all day, charging and retiring to reform countless times,
and witnessing numberless men succumb, that he never actually crossed swords with anybody that day!! 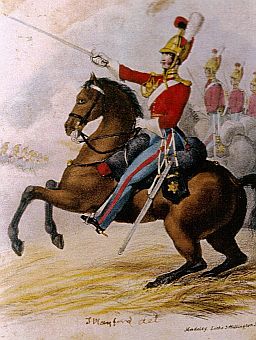 A Life Guard officer at Waterloo, by Thomas Playford

Playford also wrote his own memories of Lifeguardsman Shaw during those fateful days and these prove of particular interest. Shaw, a huge man and famous pugilist, who died a hero, spawned numerous stories of his legendary martial prowess at Waterloo. Thomas was clearly aware of Shaw’s fame and hints that the tales may have been exaggerated somewhat by the press of his day. Some things never change!
Following the battle, Thomas’s other abilities were recognised and he was often utilised to aid the regimental staff deal with the mountain of paperwork. This eventually led to his being utilised to delve into the regimental records and to produce the first official history of the regiment for King George IV, not perhaps something usual even for an educated ranker. Later, Thomas used his experience to help Cannon compile his famous series of regimental histories.
Alongside this, Thomas learnt the art of painting and he has left us some very special uniform prints in the style of Hamilton Smith and a self portrait which is a little more naive, all published here in full colour, adding a further dimension to the historical value of his memoirs. Later in life, Thomas left the army and emigrated to Australia where he continued the preaching activities he had been drawn to in England, with even greater vigour, and here he eventually died in 1873. Presumably late in his life, at the behest of his family, Thomas produced a memoir of just over 100 pages detailing his life, which is the backbone of this booklet. The present work has been produced from a typed copy as
unfortunately the original manuscript was lost many years ago in a bush fire.
I have been forced, however, against my usual principles of publishing all; to remove vast swathes where Thomas digresses to explain in tedious detail his religious views or to castigate those of other religions, and a very long passage describing his religious conversion including visions and voices which would prove extremely tedious to the general reader.
Many years later Thomas’ eldest son, another Thomas Playford, wrote a memoir which included a number of interesting facts regarding his father which fill in some of the gaps left by his father’s memoir, almost certainly because his father would have preferred to have left them hidden! These I have incorporated into the text in the relevant sections. I have also tied the text together using the narrative of the `Historical Record of The Life Guards’ which we know was written by Thomas in 1836. Therefore the text you read in this book is an amalgam of all four sources, gaining by the information gleaned from each and losing nothing of importance, as only repetition has been omitted. 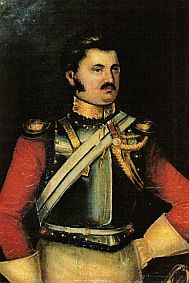