The Expedition to Walcheren 1809 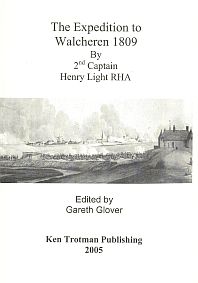 This is a copy of an article originally published in the Blackwood Magazine for 1910.
Second Captain Henry Light arrived in Walcheren at the very commencement of the ill fated expedition and via two separate tours of duty, served virtually throughout the complete period that the British army remained on the Dutch island, indeed during his second tour he succumbed to Walcheren fever but luckily survived.
The expedition to Walcheren was designed by the government as both a diversion to deflect French forces from the campaign against Austria and an attempt to seriously limit French sea power by destroying the vast naval arsenal at Antwerp. In fact it was to fail dismally on both counts and even worse, it diverted very significant reinforcements away from Wellington in Spain.
Lord Chatham led a force of 40,000 troops in 400 transports with an escort of 35 sail of the line and 23 frigates under the command of Sir Richard Strachan, which sailed from England on 28 July 1809. A landing was made on the island of Walcheren in the Scheldt waterway, guarding the great rivers entry into the North Sea. The town of Flushing was soon captured but then the incompetent Chatham failed to exploit his initial success. Instead of marching rapidly on Antwerp, which may initially have fallen owing to a lack of troops, he fretted over supply problems until the French and Dutch forces concentrated, making success impossible. The troops simply vegetated at Walcheren and died in their thousands as malaria ravaged their ranks. Eventually Chatham re-embarked his force having lost some 100 killed in action and 4,000 from disease.

This is the story as told by one young artilleryman.